IT'S NEVER TOO LATE TO FOLLOW YOUR DREAMS AND SEW. 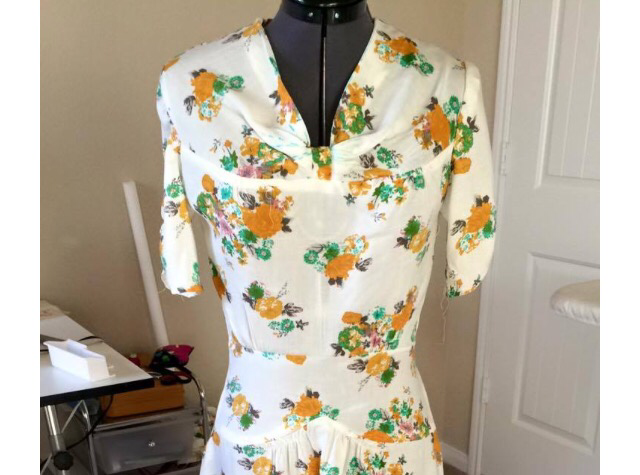 This past month has been a crazy whirl wind adventure. I recently created two dresses for a photographer from Simplicity’s 1940s dress pattern and took a wonderful vacation to my husband’s home state of Michigan.

Michigan is so beautiful in the spring and summer. We were able to get a lot of hiking and scenic driving in. Traveling mostly through the upper peninsula we go to stop at several historic sites and nature trails.

Back to why we are here. As I said earlier I created two dresses for a photographer that has been with me for a few years now. She just recently completed a 1940s photo shoot with her high school senior representatives. Both dresses were made using the same pattern Simplicity 1587 (shown below on the left). I created the short sleeved version for both dresses.

I was so excited to create these dresses for her as I had just picked up the pattern during my most recent JoAnn’s haul and was itching to try it out. I immediately returned to JoAnn’s to pick out fabrics for the lovely dresses. Lets just say I spent a good 2 hours there just trying to find the right material and 1940s style print.

These are the three fabrics that I was eventually able to find for her. I ended up purchasing the black and yellow bolts as I only had time to create two of the the three dresses. The material reminds me of some of the vintage dresses I have seen in antique shops, thin and light weight as if it it could be used for bedding. During WWII Women were encouraged to ‘Make Do’ and ‘Mend’. A ‘Mrs. Sew and Sew’ featured in advertisements in women’s magazines and propaganda cinema clips promoted the idea of recycling textiles.  To working class women who had always had to make do and mend this was all rather patronizing and nothing new.

Pillowcases would be turned into white shorts for summer. Wedding dresses would be worn several times, borrowed by sisters and friends, until the original 1939 bride in desperation for new items, remade the dress up into underwear, French Knickers or nightgowns.  The only way to have feminine underwear was to sew it yourself.  Skirts were made from men’s old plus fours or trousers.  Cast offs would be made into children’s clothes.  Collars would be added and trims applied all to eke out a limited wardrobe.

Women who could sew dresses had trouble getting hold of fabrics so they used everything from industrial blackout cloth to parachute silk or the harsher new parachute nylon.  Blankets were used to make coats and old voluminous swagger coats cut into smaller garments.  Pillowcases were trimmed with lace and made into blouses.  Nothing was wasted and even milk top discs were covered in raffia and made into handbags or accessories.

Now that I have given you a history lesson it is time to move onto the assembly of the dress.

As always the first dress was a little tricky. I was also in a funky mood and could not figure out the collar of the dress to save the life of me. After a brief deliberation with my husband (he is my go too person when I’m trying to talk through a sewing pattern dilemma) about how to assemble to garment I was on a roll.

One new technique that I tried with this dress was once I cut the pieces out of the pattern I then draped each piece on the mannequin in it’s respective place so that I could get a full vision as to how it was suppose to be assembled. Also the added bonus of this was that I did not have figure out what piece was for what as I went along. Best ideas ever! Below you can see the bodice almost complete with the pattern pieces draped.

Over the years I have found that each pattern has it’s flaws. As with this pattern the waist line on this is a little low. I discovered this after completely assembling the first dress and analyzing it on the mannequin. So on the second dress I went ahead and shortened the waist line in the pattern before cutting the material and viola it was perfect.

The second dress was a breeze to complete as I new what to expect and how to assemble the garment this go around.

I loved creating these two dresses. It has a great old Hollywood glam vibe to them and I just adore the 40s fashion era. I also loved the adventure of finding the right materials for that fit with the mood of design.

I would say that this is a pattern for a moderate to advance seamstress but don’t let that discourage you. Anything is possible with a little perseverance and practice.